Run For Your Life! It's Godzilla!!...No...Wait It's A Crustacean 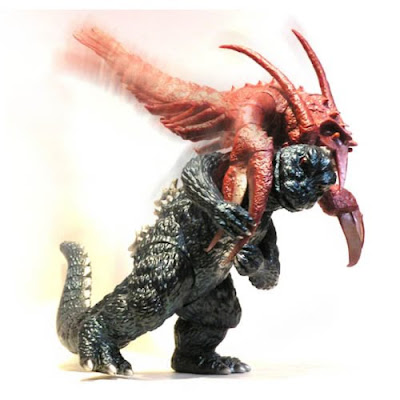 Okay Godzilla fans, listen up! I'm going to run three names by you, and you tell me what I'm talking about?

Give up? Okay, that was kinda hard because those are the Latin names for what I'm talking about. Here are the English names.

Okay, I bet ya got a guess now. They're new Bandai Godzilla figures or some other form of Godzilla toys right?

Okay, I'll tell you. The 'Swimming Mothra', 'Strong Godzilla' and 'Gnome Godzilla' are three forms of crustaceans (Remipedia) that belong to the 'Godzilliidae' species.

Here's some info from Wiki:

Members of this group (Remipedia) are colourless with a head and up to forty-two similar body segments composing an elongate trunk. The swimming appendages are lateral on each segment, and the animals swim on their backs. They are generally slow-moving. They have fangs connected to secretory glands; it is still unknown whether these glands secrete digestive juices or poisonous venom, or whether remipedes feed primarily on detritus or on living organisms. They have a generally primitive body plan in crustacean terms, and have been thought to be a basal, ancestral crustacean group. However, Fanenbruck et al. (2004) showed that at least one species, Godzilliognomus frondosus, has a highly organised and well-differentiated brain, with a particularly large olfactory area which is a common feature for species that live in dark environments. The size and complexity of the brain suggested to Fanenbruck et al. that Remipedia might be the sister taxon to Malacostraca, regarded as the most advanced of the crustaceans. This is also one of the reasons why it is included in the Pancrustacea hypothesis, a hypothethical clade of probably the most advanced Mandibulata.

Hey check it out! The one named after Godzilla is the 'smart' one!

Come to find out that the scientists who named these babies were all Godzilla movie fans.....small world.

I'm certain that this all has to do with the fact that Godzilla actually fought a giant crustacean, Ebirah, in "Godzilla Versus The Sea Monster" (Godzilla, Ebirah, Mothra: Great Duel in the Southern Seas), "Godzilla's Revenge" and "Godzilla: Final Wars."

Godzilla fans are everywhere! Trust me.