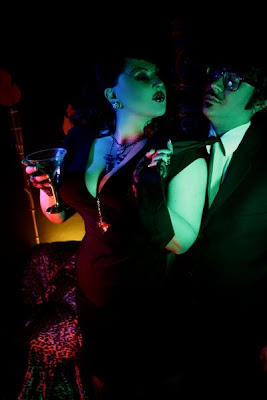 Hey, who was your horror host? If you're tempted to respond, "Whaddaya mean, my horror host?", you probably grew up in the post-local television era. Which means you spent your childhood without a mordantly sardonic costumed creep to introduce (and heckle) your Z-grade shock/shlock fare when you were staying up way too late. Horror hosts are one of the folkways of TV, beginning in the 1950s when broadcast was both local and live, with the indelible Vampira. Each station spawned its own variations on the theme, from the classic "cool ghoul" Zacherley in ..New York.., to ..Chicago..'s undead hippie, Svengoolie, to ....Cleveland....'s beatnik-styled Ghoulardi (director P. T. Anderson's father!) It just gets weirder from there, in the documentary American Scary, which digs deep to discover that before Mystery Science Theater 3000, there was a whole world of campy characters for every kid -- and stoned sophomore -- to call their own. And we've got our own host, Mr. Lobo, to share even more great goodies and treats that they couldn't pack into the film.....and then, continuing the fine tradition, we'll all watch a rare surprise TV-movie feature from the 70s!