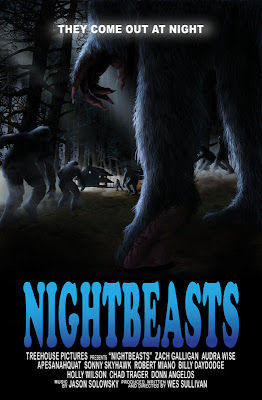 Okay, that's it! I'm officially proclaiming 2009 as 'The Year Of The Bigfoot Movie"......or "The Year Of The Sasquatch Movie".......maybe "Skunk Ape Movie?" Whatever. If it's eight-foot-tall, covered in hair, and walks on two legs, then this is the year to make a movie about it.

Let's do a quick run-down for any of you out there that haven't been paying attention. The list of 2009 American primate films include, "Savage", directed by Jordan Blum, "The Bloody Rage of Bigfoot", directed by James Baack, "Trailer Park Geocachers Meet Bigfoot", by David Carriere, "The Shrieking", by Shawn Hunt and Brian T. Jaynes "Boggy Creek".

Well, "Boggy Creek" is supposed to have some sort of swamp monster in it, not necessarily Bigfoot, but it is based on the 1972 Charles B. Pierce classic, "The Legend of Boggy Creek", and that had Bigfoot in it, so I will count it.

As you can correctly assume, I am adding yet another film to the list, Wes Sullivan's "Nightbeasts".

The only thing for sure is, Sasquatch is making a comeback, and how.

Wes Sullivan has written, produced and directed "Nightbeasts." Not known for 'live-action' films, Sullivan has made his mark as an illustrator for some of the most famous animated films ever produced, including, "Aladdin", "A Goofy Movie", "Pocahontas" and "Hercules", to name just a few.

"Nightbeasts" stars Zach Galligan (Gremlins 1&2), Audra Wise (Nip/Tuck, Miss Cast Away) and young Chad Trager, as common everyday people who, along with a group of Native Americans, are menaced by a clan of angry Sasquatch.

Here is the trailer:

You have to admit that the clip looks very interesting. I like the addition of the Native American folklore to the story.

Hey, anythings gotta be better than, "The Bloody Rage of Bigfoot" right? Well, maybe it's not fair to compare the two films? They are both coming from two entirely different points of view on every ones favorite crypto.