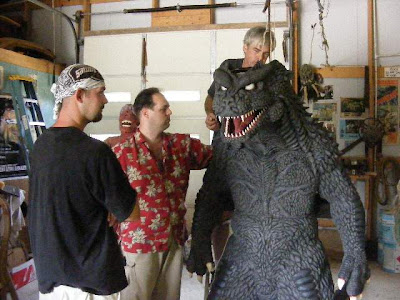 When Legendary Pictures goes out to try and find someone to create a Godzilla suit for the upcoming film, they may not have to look in Japan, but in rural Arkansas instead.

Indeed the Baker family, father Rick and his two sons Rock and Kyle, have already created a great looking Godzilla costume that is ready for filming.

The Bakers estimate that they have invested about 200 hours and some $600 on creating what they consider to be the ultimate Godzilla suit, which is an combination of several of the monster's designs from it's 50 plus year film career.

Working day and night in the garage of their Hilltop Upholstery business in St. Joe, Arkansas the Baker boys turned rubber and plastic into a monster movie icon, which for the three men, was a true labor of love. Rick Baker is a self-described old fashioned horror movie buff, while his son Rock is an aspiring comic book artist.

Yet, it was brother Kyle who got the first opportunity to try on the Godzilla suit, which featured a fan in the head and pouches in the back for ice to keep the wearer nice and cool. But the sophistication of this Godzilla costume didn't just stop there, the melting ice from the internal pockets is also circulated throughout the suit via a complex tubing system. This Godzilla also features realistic looking eyes which can be moved by remote control.

As Kyle put the monster through it's paces he turned the head of more than few passers by on US highway 65 that runs adjacent to the makeshift monster studio that also doubles as an upholstery business.

Though the suit weighs some 75 pounds and has a rather lengthy tail attached, Kyle Baker had little trouble taking Godzilla for a test drive.

"I can actually feel it push against me," he said, "but I don't really feel the weight. It's so well balanced."

Though Legendary Pictures is presently developing a new American Godzilla movie, the Bakers believe that their best chance to break into the monster suite business will not come from Hollywood, where CGI effects now have become the standard, but in Japan, where the art of suit acting is still practiced.

To show of their skill, the Baker family packed up their monster and headed to Chicago for the annual "G-Fest" convention. It was their hope that since so many Japanese film industry types would be in attendance, they may get the opportunity to impress them and possibly land an opportunity overseas.

Yet there may still be hope for a job here in America, if Legendary Pictures listens to the Godzilla fan community and opts to combine the classic Godzilla suit acting with computer graphics for their film.

Will it happen? Only time will tell, but with any luck the Baker's will be able to crush miniature cities with their creation here in America rather than overseas.