CLASH OF THE TITANS 2 Begins Production 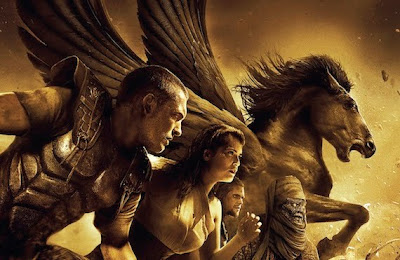 Principal photography has begun on Warner Bros. Pictures' and Legendary Pictures' epic action adventure sequel to "Clash of the Titans," being directed by Jonathan Liebesman ("Battle: Los Angeles"). Returning to star in the film are Sam Worthington ("Avatar") as Perseus, and Academy Award® nominees Ralph Fiennes ("The English Patient," the "Harry Potter" films) as Hades and Liam Neeson ("Schindler's List," "Unknown") as Zeus.

A decade after his heroic defeat of the monstrous Kraken, Perseus—the demigod son of Zeus—is attempting to live a quieter life as a village fisherman and the sole parent to his 10-year old son, Helius.

Meanwhile, a struggle for supremacy rages between the gods and the Titans. Dangerously weakened by humanity's lack of devotion, the gods are losing control of the imprisoned Titans and their ferocious leader, Kronos, father of the long-ruling brothers Zeus, Hades and Poseidon. The triumvirate had overthrown their powerful father long ago, leaving him to rot in the gloomy abyss of Tartarus, a dungeon that lies deep within the cavernous underworld.

Perseus cannot ignore his true calling when Hades, along with Zeus' godly son, Ares (Edgar Ramírez), switch loyalty and make a deal with Kronos to capture Zeus. The Titans' strength grows stronger as Zeus' remaining godly powers are siphoned, and hell is unleashed on earth.

Joining Worthington, Fiennes and Neeson in the international cast are Danny Huston ("Robin Hood"), reprising his role as Poseidon, god of the sea; Edgar Ramírez ("The Bourne Ultimatum," TV miniseries "Carlos") as the traitorous god of war, Ares; Bill Nighy ("Harry Potter and the Deathly Hallows - Part 1") as Hephaestus, whose twisted, lame figure belies his Olympian origins; Toby Kebbell ("Prince of Persia: The Sands of Time") as Agenor, imprisoned thief and son of Poseidon who joins Perseus on his journey to Tartarus; and Rosamund Pike ("Barney's Version") as Andromeda, the princess whose life Perseus once saved, and who now, as a queen, follows Perseus into battle.

"Clash of the Titans 2" will be filming in studios outside London and will later shoot on location in Surrey, South Wales and in the Spanish Canary Islands on the island of Tenerife. The film is currently scheduled for release in March 2012.