DARK SHADOWS To Return To Comics Just In Time For Halloween 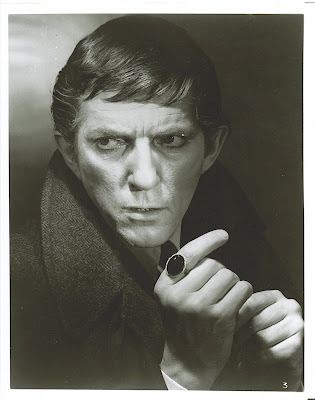 Television's original reluctant vampire is back! Barnabas Collins is re-adjusting to life under his vampiric curse. Haunted by terrifying dreams of his age-old lover and nemesis, Angelique, and fighting his bloodlust, Barnabas fears that danger lies ahead for all who live at Collinwood. Meanwhile, Barnabas's ally and trusted friend Dr. Julia Hoffman is harboring secrets of her own. Written by Stuart Manning and drawn by Aaron Campbell, with covers by Campbell and superstar artist Francesco (Black: Panther: Man Without Fear, Swamp Thing) make sure to get the horrifying Dark Shadows #1!

Collinwood, an ancestral mansion on the remote Maine coastline, is home to the Collins family, a dynasty haunted by secrets and a supernatural curse spanning two centuries. Barnabas Collins is facing an uncertain future and new threats. Cursed in 1795 by the witch Angelique, Barnabas has lived as a vampire for almost two centuries. Out of his own time and now a self-appointed protector for the Collins family, accompanied by his loyal confidante Dr. Julia Hoffman, Barnabas lives in fear that Angelique might return as he seeks a cure from his vampiric affliction. Picking up directly where the original daytime episodes of Dark Shadows left off, the new comic book will bring the familiar residents of Collinwood further into the 1970s, facing threats both old and new.

Jim Pierson of Dan Curtis Productions, the show's creator, declares "Dark Shadows still casts its imaginative spell on so many devoted fans who have discovered the series over the past four decades, captivated by its unique blend of Gothic romance, mystery, horror and a touch of science fiction."

Says writer Stuart Manning, "With stunning artwork capturing the likenesses of the classic actors and exciting new serialized stories, the Dark Shadows comic will appeal to both the original generation of fans who ran home from school and new audience of fans ushered in by Tim Burton's forthcoming big screen remake, starring Johnny Depp."

"I am so happy to work with someone of Stuart's expertise and caliber," states Dynamite Entertainment President and Publisher Nick Barrucci. "Aaron's fantastic work on Sherlock Holmes and Green Hornet: Year One and Francesco Francavilla's covers are truly a sight to behold!"

"We've really put together a great team," adds Editor Joe Rybandt. "Stuart is crafting a tale for fans old and new, and Aaron's incredible detail will find a perfect home with this title, capturing the mood and atmosphere of Dark Shadows perfectly. It's gonna be a truly Gothic affair."
By Ken Hulsey at July 19, 2011