Even mightier than 'King Kong'! 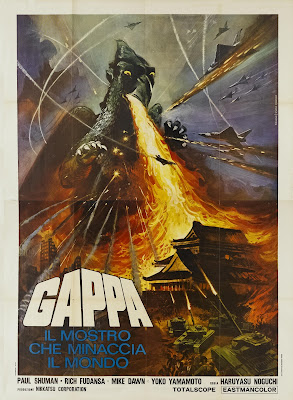 Daikyojū Gappa (1967) was produced by Nikkatsu Corporation, and was their only foray into the giant monster genre. The foreign sales title for the film was Gappa: The Triphibian Monster, and was dubbed into English (considered the "International Version"). The film was picked up by American International Pictures and released directly to television in the US under their American International Television banner, and retitled Monster from a Prehistoric Planet. This version was one of many films syndicated to broadcasters nationwide by AIP-TV, and became a staple for Horror Hosts on television stations from San Francisco to New York City from the late 1960s through early 1980s.

There was an urban legend that Nikkatsu's international English prints originally had a racist line, "The monsters are attacking Tokyo. Fortunately they are attacking the Negro section of town." (and that the line was changed). This was untrue.

This film was intended as a lighthearted satire of the daikaiju films of the period. This is one of the reasons the film has come under criticism by many people and kaiju fans. But some of the satire is lost in translated overseas prints.

The film's special effects were provided by Akira Watanabe, who had worked as an art director on many tokusatsu films such as the 1957 Toho sci-fi classic, The Mysterians.

In the Japanese version, the opening credits and ending were accompanied by a Rock & Roll theme song, "Gappa, The Colossal Beast" (the first and second verses, respectively), and the touching reunion scene near the end had a ballad called "Keep Trying, Baby Gappa!". In all overseas prints, the opening and ending songs were replaced with standard orchestral music, and "Keep Trying, Baby Gappa!" was instrumental.

The adult Gappas had a cameo scene in the British comedy/sci fi series Red Dwarf. In episode 6 of series 4, "Meltdown", Arnold Rimmer and Kryten arrive on a planet they will later discover is a giant Waxdroid theme park. After sending the teleporter they used to arrive back to pick up Lister and The Cat, they are forced to flee by the Gappas. Kryten later comments that he's seen more realistic dinosaurs in packets of Wheatie Flakes.