October Is Here - Welcome To The Month Of Monsters! 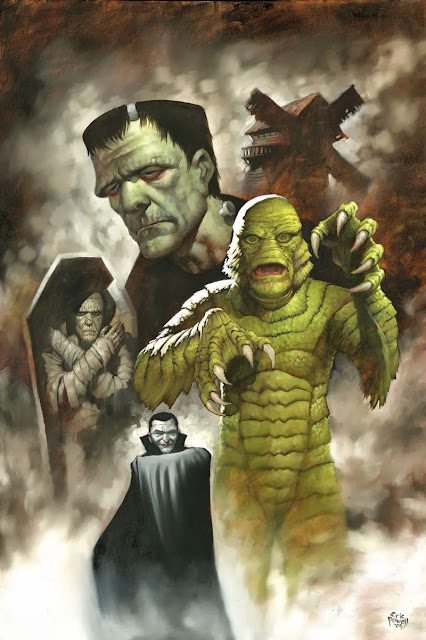 October is the "Month of Monsters" at Monster Island News. All month long our website will be featuring stories, profiles and collectible items about some of Hollywood's greatest icons of horror.

In 1932 a new horror movie was put into production to capitalize on the success of Frankenstein, and its star Boris Karloff. The initial idea was to produce a film based on the real life exploits of the French mystic Cagliostro, who claimed that he had lived for several generations. This idea was soon dropped for a screenplay that was penned by Nina Wilcox Putman that featured the resurrected corpse of an ancient Egyptian prince. One has to remember that Tutankhamen’s tomb had just recently been discovered and there was a national obsession with Egyptology. Universal felt that the combination of Karloff and this topical theme would guarantee a hit, and they were right.

Carl Denham is a producer and director of adventure films specializing in remote and exotic locations. He sets off to a remote island, uncharted except for a map he purchased from a seaman. He hires a ship and with the star of his film, Ann Darrell, he sets off to Skull Island where there supposedly lives a large ape known as Kong. Thie island itself is is divided and the giant ape lives behind a great wall. Whe the local islanders kidnap Ann to offer her as a sacrifice, Denham and John Dricsoll set off to rescue her. It's obvious that Kong is fascinated with Ann and means her no harm but Dehnam gasses the beast and transports it
to New York where he puts it on display. When it manages to escape, it terrorizes the city, climbing to the top of the Empire State building where it must confront air force planes trying to shoot it down.

In 1941 Curt Siodmak sat down at his desk with the intention of writing a horror story that would draw on Greek Mythology and the belief that somehow a man could transform into an animal, a common legend that ran through the folklore of just about every culture on Earth. Little could he have realized that the script he was about to write, The Wolf Man, would not only have an effect of the future of horror films, but the future of the occult as well. It has always been a common belief that many of the concepts of lycanthropy that were portrayed in the film came from a collection of popular folklore and witchcraft. In fact nothing is further from the truth. Siodmak was responsible for coming up with the design of the pentagram, the werewolf’s vulnerability to silver, and the full moon being the catalyst for the transformation from man to beast all on his own. In fact the legendary poem “Even a man who is pure of heart, and says his prayers by night, may become a wolf when the wolf bane blooms, and the autumn moon is bright.” is a Siodmak original.

Don;t worry crypto fans we got ya covered as well...

‘Huge, scary, aggressive, fast, and threatening’. These terms are used to describe several Bigfoot-like creatures said to inhabit the desert regions of southern California. These mysterious giant apes go by many different names, The Borrego Sandman, The Speedway Monster, Zoobies, Devils, and the Yucca Man. It may come to the surprise of those who follow stories about Bigfoot and other mysterious creatures that the first report of these creatures by European settlers did not come from the East Coast, Midwest, or even the Pacific Northwest. It actually came from southern California. In 1769, Spanish priests founded the first mission in San Diego.