Star Wars At 40 - Darth Vader Had Emotional Problems ... Ya Think? 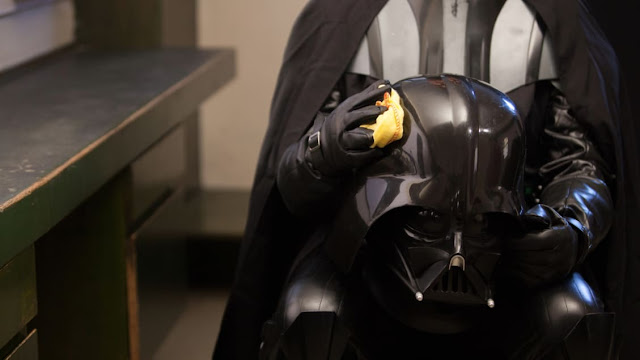 I think that it is safe to assume that Darth Vader (aka Anakin Skywalker) may have had a few 'issues'.

He left his mother at a tender age to join the Jedi only to seek her out as a teen, he finds her after she was captured by Sandpeople then she dies in his arms. He got a little upset and went on a killing spree. He always thought that his fellow Jedi were holding him back so he turned to the dark side and slaughters his comrades, kills his own wife and tries to barbecue his best friend and mentor only to end up becoming a half-machine half-man monster with a bad Asthma problem.

Most people may be a little off center after experiencing stuff like that.

Now some bored French researchers have spent some quality time watching the "Star Wars" films over and over again with pen and paper in hand to figure out just what was eating at the elder Skywalker.

Borderline personality disorder? Borderline? Um ... the guy used to like to choke people for fun.

What were the signs doc? Well according to the French, Vader suffered from extreme mood swings, had unstable relationships and was easily influenced by others, namely Emperor Palpatine. Oh, and his use of the dark side of The Force could have been like an addiction to medication or hard-core drugs for Vader.

The researchers that conducted the evaluation of the 'Dark Lord of the Sith' concluded that if the Jedi had gotten the young Anakin Skywalker some therapy he probably wouldn't have turned to evil and may have had a relatively 'normal' Jedi life. You know, gone fishing with Obi Wan and Yoda, celebrated Life Day on Naboo with his in-laws and family, taught Luke and Leia how to fly a speeder or use a lightsaber to promote peace, and helped Jar Jar with his English.

Sort of Norman Rockwell in an intergalactic way.

Why would a bunch of French doctors waste valuable time and money to put a fictional character on a hypothetical couch? Well to promote awareness of BPD (borderline personality disorder) and teach young psychology students to understand and diagnose the symptoms of this serious problem that effects both men and women.

Now, analysing Darth Vader seems like a relatively easy one, try The Joker from the "Batman" comics. Now that would be a challenge worthy of French psychologists!

Oui he is a crazy clown person no? Le bonkers ...homicidal no?