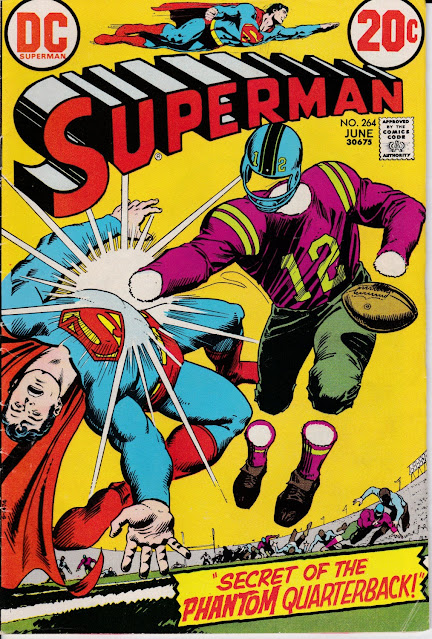 Former Metropolis Meteors star quarterback is walking down the street when he sees a baby falling from a building. He saves the infant, but awakens an old knee injury that he gained during his pro football years. A scientific "miracle worker" named Frederic Fowe witnesses the spectacle and offers to treat Steve's injuries. He uses a special solar healing ray which quickly restores Lombard to proper health. However, the ray also demonstrates an unusual side-effect, as it creates a solar-powered energy being based upon Steve's likeness. The energy being adorns itself in one of Steve’s old football jerseys and becomes the Phantom Quarterback.

The Phantom Quarterback bounds across Metropolis committing random acts. Superman arrives on the scene, and determines that the entity is more a nuisance than an aid, and so he launches the creature into outer space where it impacts with a sunspot on Earth’s sun.

Later, Morgan Edge of WGBS hires Steve Lombard to work for him as a sportscaster. Clark Kent and Lois Lane immediately take a disliking to Steve who irritates them with his aloof attitude and quirky behavior.

1st printing. This comic book is in used condition. Comic is complete with cover and all pages attached. This comic has flaws that warrant a VG/F grade. Comic Book will be shipped bagged and boarded!
By Ken Hulsey - February 18, 2021