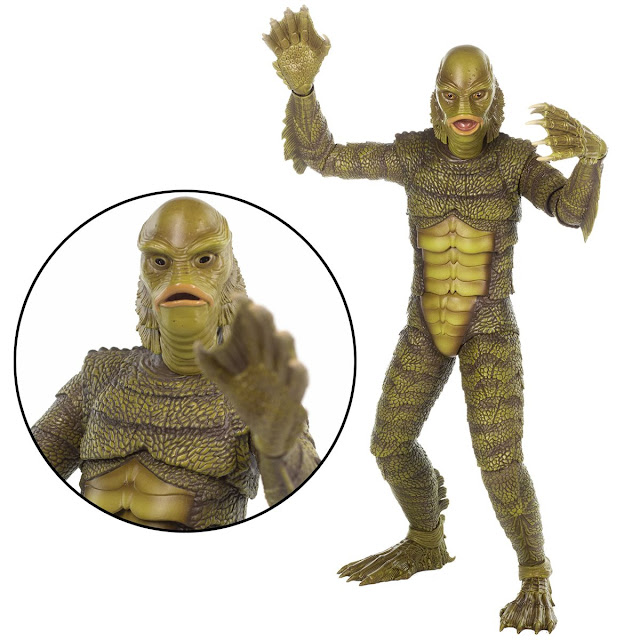 "Creature from a million years ago!"
It's the monster from the horror film Creature from the Black Lagoon!
Meticulously crafted, super-detailed 12-inch tall action figure.
Features 16 points of articulation, plus multiple heads and hands.

"Creature from a million years ago! Every man his mortal enemy... a woman's beauty his prey!"

Meticulously crafted, super detailed, and two years in the making, this sensational Universal Monsters Creature from the Black Lagoon 1:6 Scale Action Figure is a wonder to behold! Inspired by the 1954 black-and-white monster horror film Creature from the Black Lagoon from Universal-International and standing roughly 12-inches tall, the swamp-rompin' PVC figure features 16 points of articulation, a regular head, an open-mouth head, a revenge head, 2 swim feet, 2 swim hands, and even a fossil hand. You gotta get one of these!

"Return of the Living Mummy!":
The Mummy awakes in New York City and tries to discover what he has become and where he is at. He is then attacked by the police.

"The Martian Who Stole a City!":
A teenage puzzle solver deduces that the Martian who is stealing entire city blocks with a mechanism that can transport them to Mars is sensitive to light. Armed with this knowledge, the authorities overpower the creature and force him to reverse the effects of the mechanism.

Creature From The Black Lagoon (1954)(Universal)