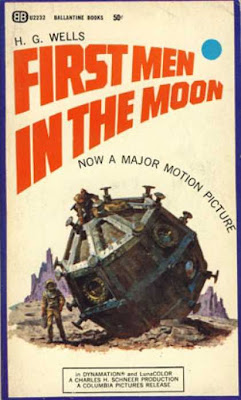 Mark Gatiss (League Of Gentlemen, Doctor Who) is to star in his own adaptation of HG Wells' thrilling scientific romance The First Men In The Moon alongside Rory Kinnear (Waking The Dead, Silent Witness), in a one-off 90-minute drama from Can Do Productions for BBC Four.

Mark Gatiss says: "I'm completely delighted to have the chance to bring this wonderful, funny, charming and scary story to BBC Four. It's very rare to be able to adapt a genius like HG Wells for the small screen and we hope to do full justice to his extraordinary vision."

It's July 1969 and, as the world waits with baited breath for news of the Apollo 11 astronauts, a young boy meets 90-year-old Julius Bedford (Rory Kinnear) who tells an extraordinary story of two men's journey to the Moon, way back in 1909.

As a young man, Bedford chances to meet Professor Cavor (Mark Gatiss), a somewhat unworldly scientist with an amazing invention: Cavorite – anything to which it is applied becomes opaque to the force of gravity. Knowing a miracle when he sees one, and with a keen eye on profit, Bedford encourages Cavor to think big. And so the two men construct a copper and cast-iron sphere which will fly them to the Moon. But what terrors await them in the lunar interior? And will they ever succeed in returning to Earth?

This is the inaugural drama for Mark Gatiss and Damon Thomas's Can Do Productions. The pair previously collaborated on the acclaimed Antarctic drama The Worst Journey In The World and last Christmas's popular ghost stories Crooked House for BBC Four.

Richard Klein, Controller, BBC Four, says: "The First Men In The Moon is a thoroughly modern classic, a witty and satirical piece of writing by one of Britain's foremost and original science fiction writers.

"It shines a light on man's natural desire to always get it wrong. I am delighted that Mark Gatiss has decided to bring this forgotten and yet wholly timely work to our screens."

The First Men In The Moon was commissioned by Ben Stephenson, Controller, BBC Drama Commissioning, and Richard Klein.

Damon Thomas is also the director and Julie Clark (Glorious 39, Whitechapel) is the producer. The BBC executive producer is Jamie Laurenson.

Jim's father is played by Peter Forbes (Casualty, The Bill) and his mother by Katherine Jakeways (Bremner, Bird And Fortune, The Armstrong And Miller Show).

On Wells Novel (From Wikipedia)

The First Men in the Moon is a 1901 scientific romance novel by the British author H. G. Wells. The novel tells the story of a journey to the moon undertaken by the two protagonists, the impoverished businessman Mr Bedford and the brilliant but eccentric scientist Dr. Cavor. On arrival, Bedford and Cavor find the moon inhabited by an extraterrestrial civilization the two refer to as "Selenites".

The novel can be read as a critique of prevailing political opinions of the period, particularly of imperialism. The theme of a clash between civilizations is reminiscent of Wells's earlier and more famous work, The War of the Worlds. As in The War of the Worlds, it is hinted that the non-human civilization presented might reflect the way human society would develop in the far future. As such, the Selenite society depicted could be considered either a utopia or a dystopia, depending on which of its features one emphasizes
By Ken Hulsey at October 29, 2009