SyFy / Roger Corman Finally Get It Right With SHARKTOPUS Trailer 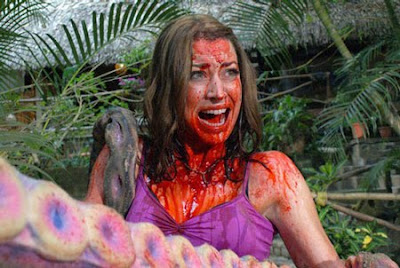 Over the past couple of years we have had a great time poking fun at all of the crazy monster mash-up movies that have been churned out by The Asylum, Roger Corman and the SyFy Channel. With films like "'Dinocroc vs. Supergator", "Dinoshark", "Mega Piranha", "Mega Shark vs Giant Octopus" and the upcoming "Mega Shark vs Giganotosaurus", it was all too easy to point a finger and laugh out loud at all of the cheesy, over-the-top, monster antics, with 80s pop-stars added in for nostalgia, and to hook in all of us Gen-x types.

As you can probably imagine, when I heard that SyFy was teaming up with legendary film producer Roger Corman for a film called, "Sharktopus", I naturally assumed that it was going to be another film in a long line of films that were big on hype, big on spectacle, with little true entertainment value.

That was until I saw the trailer this morning.

I have to be honest, It took me by complete surprise, it was good, and it actually made me want to see the final product.

Granted, "Sharktopus" is a low-budget monster mash just like all the films I mentioned before, except this time, from what can be seen in the trailer, it looks like Corman has gone back to the tried and true formula that made many of his prior works such cult classics, a great monster design, wacky 1950s era pseudo-science, violence and tons of lovely ladies in bikinis.

Everything about this trailer, even the music, is a throw-back to old monster films, which is what makes it work.

This one looks like a monster film that only a master like Corman could have made and the bikini clad hotties are getting eaten up faster than California Rolls and an all-you-can-eat sushi buffet.

Sharktopus is about a research scientist (Eric Roberts) and his talented daughter who develop a secret military weapon, a hybrid shark/octopus that can be controlled by electrical implants. But when the controls break down, the monster goes on a killing rampage at the resort beaches of Mexico.

From that, you can see why I was kinda thinking that we were going to get more of the same old stuff here.

True, the trailer may actually give way too much away, and the footage may be the cream of the crop here, but it did the trick, I'm now on board for this one.

Here is the surprisingly good trailer for "Sharktopus":