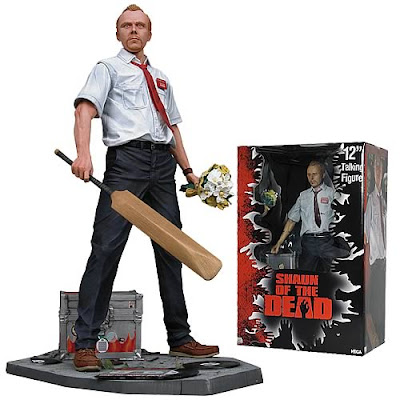 Order Your Shaun of the Dead Figure Here For Only $37.99!
Source: Entertainment Earth

Relive the adventure with this 12-inch tall Shaun of the Dead Talking Figure. Shaun really gets the deluxe treatment in this 1:6 scale. He comes with his cricket bat and base, an interchangeable left hand with a flower bouquet, and speaks key phrases from the movie. So, c'mon. Have some good old-fashioned, flesh-eating fun! "How's that for a slice of fried gold?" Shaun also voices the following:

"We need to be somewhere more secure, somewhere on the ground, somewhere we can stay alive."

"If you get cornered, bash them in the head. That seems to work."

"I don't think I've got it in me to shoot my flatmate, my mum, and my girlfriend all in the same evening."