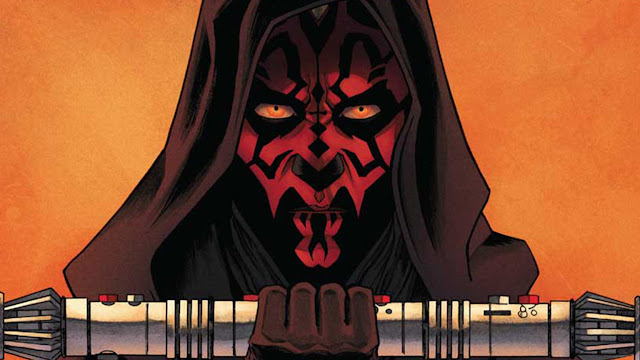 The new "Solo" novelization will reveal more about Maul's connection to Dryden Vos and where Qi'ra fits into the puzzle.

Solo: A Star Wars Story offered fans a number of connections to the other chapters of the Star Wars saga in both subtle and obvious ways. One of the more surprising connections was the appearance of Maul in the film's final moments, whose last live-action appearance was in Star Wars: The Phantom Menace. The character's brief time on screen left many audiences wondering about his significance, which the upcoming novelization of the film shed light on.

In the film, Qi'ra (Emilia Clarke) defeats Dryden Vos and contacts his boss, which is revealed to be Maul. Qi'ra has a brief conversation with Maul, though it's unclear if the two had any previous connection to one another. Author Mur Lafferty shared with StarWars.com that Qi'ra likely had no idea who the former Sith was.

“I don’t think she would have known who he was,” Lafferty admitted. “They sort of implied that Dryden was beholden to someone a lot more powerful than he was. And so she knew that whoever it was scared him, but she didn’t know that the guy used to be a Sith Lord. She didn’t know who he was. She just knew that that button would call Dryden Vos’ boss.”

While Maul was seemingly killed by Obi-Wan in Phantom Menace, Star Wars: The Clone Wars explained how he survived the ordeal and went on to become a ruthless crime lord. No longer a Sith, he abandoned the "Darth" moniker and went into business with his brother, Savage Oppress.

The character has become one of the most recognizable villains in the Star Wars saga, though Lafferty points out that the galaxy of characters is so large that it's entirely possible that virtually no one would know who Maul was in any capacity.

“It’s hard to think that Vader and Maul and all these great villains we’ve known for so many years, a lot of them were behind the scenes and not known to the general public," Lafferty noted. "Han Solo didn’t even believe in the Jedi, so the grand battles and stuff that are so forefront to the audience are not, necessarily, known to the random person growing up on Corellia."

The novel, which expands on multiple different scenes from the film, as well as include scenes that didn't make the final cut of Solo: A Star Wars Story, hits shelves on September 4th.

Get Up Off Your Butts And Go See "Solo: A Star Wars Story"!!!