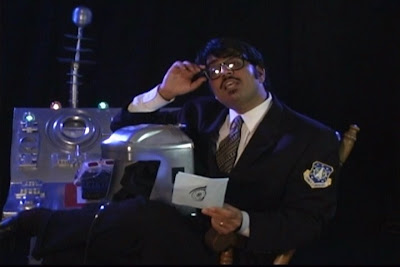 Your horror host MR. LOBO is busier than a CRAWLING EYE with one tentacle! Starting in May CINEMA INSOMNIA is broadcasting on 2 new TV stations: WKRP in TENNESSEE and KCAB in ARIZONA serving CINCINNATI cable they're not kidding. For those of you not in the viewing area of those great stations, we're also adding 4 new free shows to LOBOVISION that you can watch right now at cinemainsomnia.com!

MR. LOBO and crew are embarking on a B-Movie tour of theaters and other venues across the country and here at our home base Sacramento MR. LOBO offers autographed DVDs, T-shirts, and other merch at the TOY FUSION store, teams up with MOVIES ON A BIG SCREEN, appears LIVE and in person MAY 2nd at EMPIRE COMICS, and hosts the 30th Anniversary 35mm screening of HARDWARE WARS at THE CREST theater on JUNE 4th!

Mr. Lobo is partnering with WILL THE THRILL and DOUBLE BILL DEVER to unite the B-MOVIE NATION, conspiring with SHADOWS IN THE DARK radio, ANOMOLIES NETWORK, and MYSTERIES MAGAZINE to advance paranormal media, collaborating with JIM SINCLAIR on a CAPT. COSMIC comic book due out next year, and planning with SACRAMENTO HORROR FILM FEST, APPREHESIVE FILMS, BRAINS: the comic book, NOVEMBER FIRE apparel, ERNIE "PLAN 9.1" FOSSELIUS and others to put on an ALL ZOMBIE CONVENTION!

Mr. Lobo is interviewed in AMERICAN SCARY and contributed EXTRA FEATURES to the CREATURE FEATURES documentary WATCH HORROR FILMS KEEP AMERICA STRONG. Of course there have been new CINEMA INSOMNIA DVD releases and we've even produced some exclusive to DVD content. Cinema Insomnia is going to offer a calendar to help us all keep track of the madness! WHEW!

As you know, here at the front lines it's been rough. Our enemies have been busy as beavers to keep loyal SLEEPLESS KNIGHTS like you in the dark. MR. LOBO'S MYSPACE: www.myspace.com/mr_lobo, the YAHOO! group: groups.yahoo.com/mrlobosknights, Fan site: SupportYourLocalHorrorHost.com and the CINEMA INSOMNIA Forum, all tell part of the story!

Our web overlord and SUPREME KNIGHT OLAV will be resurrecting the CI CALENDAR to keep you HEP to all the many HEP-PENINGS that are happening. Live Appearances, Screenings, Releases, and INSOMNIAC Meet-ups will be added on a regular basis so keep checking back.

NEW DVDS FOR A BETTER ECONOMY

Thank you for your part to KEEP INSOMNIA STRONG by resisting black market "rips" and buying official CI MERCHANDISE! If there was ever a time to invest in CINEMA INSOMNIA DVDS it is RIGHT NOW. We're doing our part by switching to ALL AMERICAN MADE discs, printed materials and cases. This will cost MR. LOBO and APPREHENSIVE FILMS more per unit, but will allow all of us to sleep a little better. Most available titles can be found at "THEGRINDHOUSE.NET" and you can also pick them up here at our store. NORMALS can find more comfortable outlets for them at TARGET.COM and AMAZON.COM.

This recently produced show is now a SLIME LINE DVD featuring a GIANT interview with RICHARD KIEL and THE QUEEN OF TRASH AS SHEEGAH! Wannabe Rockabilly Idol ARCH HALL co-stars in the feature with many of the songs mercifully cut. ENJOY a night filled with prehistoric TV commercials, bone-head jokes, and retro fun! Only $15.00 plus shipping. QUANTITY DISICOUNTS AVAILABLE!

IF you missed this DVD the first time or need a excuse to buy it again the re-mastered SLIME LINE version is finally here! LOBO and WILKINS join forces! It's Bob's last TV performance, with retro clips, CI and CREATURE FEATURES flashbacks, and highlights from some of Bob's favorite films. Includes 3-D Glasses for 3-D bonus features. Only $15.00 plus shipping - $20 for DVD plus POSTER!

MANY MANY OTHER TITLES - NOT FOR THE SQUEEMISH

For the die hards who gotta catch'em all MR. LOBO hosts DICK TRACY MEETS GRUESOME, GAMERA SUPER MONSTER, SUPERARGO, CARNIVAL OF SOULS, THE BRAIN THAT WOULDN'T DIE, HOUSE ON HAUNTED HILL, SANTA CLAUS CONQUERS THE MARTIANS, CREATURE, A BUCKET OF BLOOD, HORROR OF PART BEACH, MONSTER FROM A PREHISTORIC PLANET and others to make you and your DVD collection happy!

OBSESSIVE COMPULSIVES, ARE YOU ALL CAUGHT UP WITH DVD'S?

See Also: Plan 9 From Outer Space Strikes Again / A Public Memorial To Bob Wilkins In Sacramento / Is There Something Bold And Creative Brewing In Sacramento? / Support Your Local Horror Host....Or In This Case Mr Lobo / Bob Wilkins 1932-2009 The Passing Of A Bay Area Icon / Merry Christmas From Monster Island / Mr Lobo Composes A New Halloween Song / Silicon Presents The Lobotronix Film Show / Mr Lobo And Conrad Brooks Cast In Plan 9 From Outer Space Remake / Mr. Lobo & The Queen Of Trash Get The VIP Treatment At The B Movie Celebration / Sara Dunn Photo Shoot And Casting News / B Movie Celebration Scores World Premiere Of Cleavagefield / The Hometown Of The B Movie Celebration Needs Our Help! / Cinema Insomnia: In Search Of Ancient Astronauts /Mr Lobo To Receive Lifetime Achievement Award At The B Movie Celebration / Famous People Talk About Star Wars / Two More Big Reasons To Go To The Fangoria Weekend Of Horrors / Donate Trash So That The Queen Of Trash Can Make Her Music Video Debut / Interview: Sara Dunn (Queen of Trash)