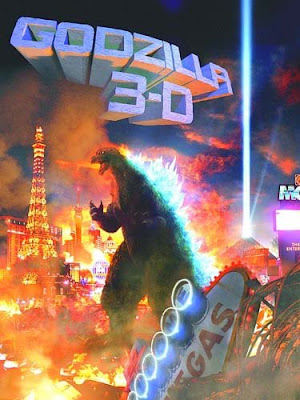 Just about everyone is familiar with the children's story, "The Little Engine That Could". In that story a brave little locomotive climbs a very steep hill despite every obstacle that is against it. Well, such is the story with the now infamous "Godzilla 3D" (Godzilla 3D To The Max, Godzilla vs Deathla) movie. It seems like every time fans believe that the dirt has been shoveled onto the project, it rises again from near extinction.

It's actually funny that I am writing about "Godzilla 3D" today, because just last week, a bunch of fans and I were talking about it on Facebook.

Big time Godzilla fan, Ryan Smith, took it upon himself to contact Kerner Productions about the film and this is the response he received, "Kerner Productions is not involved in the current development of the project at the moment. I believe it is still moving forward though."

Well then later in the week, giant monster maven, Avery Guerra, just happened to check the IMDB page for the film, and made the discovery that it had been updated on April 11th.

Avery wasn't sure exactly what had been changed, but the film has a listed release date of 2011 and its status is now listed as "in pre-production."

Here is some more info on "Godzilla 3D" that is presently listed at IMDB:

Now correct me if I'm behind the curve on this one, but the last time I heard anything about "Godzilla 3D" many of these names (with the exception of Banno and Okuhira) were not associated with the film, so maybe this is what has been updated? I have to admit that I hadn't checked on the film for some time, so this may be old news to some of you.

There was a little blurb in press release from Sony for "Woke Up Dead", last year that stated that Brent Friedman was presently working on "Godzilla 3D" for the digital studio Electric Farm Entertainment. None of that information was listed at IMDB.

Now, I'm not posting this information to get any ones hopes up, but all indications point to "Godzilla 3D" actually beginning filming very soon. I just hope that another wall isn't thrown up in front of the production team. Fans have been waiting since 2005 for this one.


A Pin-up Girl Riding Godzilla - Now This Is Art! / Godzilla & The Monsters Of Mass Destruction Trailer / Steve Bissette Creates Special Artwork For New Hampshire Screening Of King Kong vs Godzilla / G-FAN #87 Summary / Ishiro Honda Bio Being Negotiated / Robert Scott Field Is Joining Kenji Sahara At G-FEST XVI / King Kong And Godzilla Invade The London Subway / King Kong vs Godzilla (1962)(Toho) / G-FEST XVI To Host Kenji Sahara / Photo Of The Week - Godzilla Goes On A Date / New Wooden Godzilla Figures Cost More Than Most Cars / Rare Video - Haruo Nakajima Puts On The Godzilla Suite One Last Time For Magazine Shoot / Toho Is Renting Out Godzilla And MechaGodzilla Movie Costumes / Yumiko Shaku Looks For love At The Blood Bank / Godzilla To Add His Fire To Hot Atlanta / Godzilla Vs The Netherlands / You Can Do Anything But Lay Off Of My Kaiju Shoes / Haruo "Godzilla" Nakajima Turns 80 /King Kong, Godzilla And The Creature From The Black Lagoon At The Rose Parade / The Top Ten Hottest Monsters Of 2008 / Godzilla Rodan Ultraman And Mothra Invade The Miami Beach Art Scene / James Morrow Satirizes Hollywood, Secret Goverment Projects And Godzilla In Shambling Towards Hiroshima / Godzilla 3D Poster / Will Silent Night Be Replaced By Godzilla Christmas? / Rare Sci Fi, Fantasy, and Horror Items Go Up For Auction
By Ken Hulsey - May 06, 2009