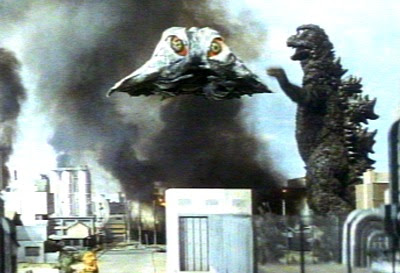 Yesterday, I wrote a small article on some recent rumblings that had to do with the much maligned "Godzilla 3D" movie. To my surprise, the article seems to have unleashed the "Smog Monster" upon us all. There seems to be two camps out there, one thinks that I am a bonehead for bringing the subject up without any "official" news being released, and the other looks at the points I brought up with optimism, that somehow the film may still yet get made.

Now, before I get into this I want to make one point clear. I never said that the film was in production, I merely stated that the signs were pointing to the film beginning production. Many readers miss-understood the points of the article to state that the information had somehow come down from the mountain on a stone tablet written by The Almighty. I can only assume that many people only took the time to "look" at the article, but didn't manage to "read" it.

If somehow my prior article rubbed you the wrong way, I sincerely apologize. I was merely stating the facts as they were presented to me.

Now, that being said, here are a couple of emails that I received about the "Godzilla 3D" movie.

Ryan Smith, who was mentioned in the prior article, sent me a copy of an e-mail he received from Megan Moorhouse of Electric Farm:

I'm one of the interns here at Electric Farm and I just looked up the Godzilla 3D project for you.

We have not been involved in the project, but after looking some things up, all I can tell you is that it is being produced by Brian Rogers and Kenji Okuhira through Advanced Audiovisual Productions and is set to be released in 2011.

I hope you find who you're looking for.

All the Best,
Megan

Now, that certainly seems to rule out the prior report that Electric Farm is involved, but it still states that the production is still in some state of production.It is neither a confirmation or rejection. Read into it what you will.

Here is a copy of an e-mail that was relayed through Avery Guerra, basically stating that I was somewhat irresponsible for posting the information on "Godzilla 3D". I post this because I believe in giving everyone a fair deal, even if they don't agree with me:

"Avery, I just read the Robojapan report and didn't see any solid info to justify an article stating (as if it's a fact) that pre-production has begun. I think imdb is a great info source, but film production is always in flux... especially so for something like GODZILLA 3-D which has had 6 years of false starts and multiple claims that "pre-production has begun" when nothing has really happened. There's just no "proof" there.

Without some kind of official word or outside corroboration, the Robojapan article will most likely just confuse and mislead people, which IMO a news site should do it's best NOT to do. I did notice that the article linked to a Robojapan report from a year ago called "3D Godzilla Film In Production"... I would hope someone would have learned not to read too much into every mention or rumor about this film and treat it like it's real news.

Two points in the article: 1) Ken mentioned he thought the production credits were new, but all of the names have been attached to the film for 4-6 years. I'm not positive, but I think at least one of those people left the project years ago.

2) The fact that Kerner is no longer involved is actually a bad sign that this production is going forward. After all, they were the primary FX company for this film."

I don't know, honestly, if "Godzilla 3D" is being made or not. I'm just reporting on the rumors and talk that has surfaced over the past couple of weeks. If the film reaches the theaters in 2011, as advertised, then I'm going to look like "the good guy", if it doesn't, the I'm going to look like a smuck. That's just how it goes. I can't control that.
I do want to quote fellow writer Michael Cohen on reporting rumors, "yes people assume that you are ‘hoaxing’ when you put up an article that turns out to be BS, but the thing is you don’t have a choice-if you want the ‘scoop’ you don’t have time to research."
Sometimes when writers report on things they don't have the time to read up on every single detail, they kinda have to go with the information in front of them......for better or worse.
See Also: Godzilla 3D Begins Pre-Production For 2011 Release / A Pin-up Girl Riding Godzilla - Now This Is Art! / Godzilla & The Monsters Of Mass Destruction Trailer / Steve Bissette Creates Special Artwork For New Hampshire Screening Of King Kong vs Godzilla / G-FAN #87 Summary / Ishiro Honda Bio Being Negotiated / Robert Scott Field Is Joining Kenji Sahara At G-FEST XVI / King Kong And Godzilla Invade The London Subway / King Kong vs Godzilla (1962)(Toho) / G-FEST XVI To Host Kenji Sahara / Photo Of The Week - Godzilla Goes On A Date / New Wooden Godzilla Figures Cost More Than Most Cars / Rare Video - Haruo Nakajima Puts On The Godzilla Suite One Last Time For Magazine Shoot / Toho Is Renting Out Godzilla And MechaGodzilla Movie Costumes / Yumiko Shaku Looks For love At The Blood Bank / Godzilla To Add His Fire To Hot Atlanta / Godzilla Vs The Netherlands / You Can Do Anything But Lay Off Of My Kaiju Shoes / Haruo "Godzilla" Nakajima Turns 80 /King Kong, Godzilla And The Creature From The Black Lagoon At The Rose Parade / The Top Ten Hottest Monsters Of 2008 / Godzilla Rodan Ultraman And Mothra Invade The Miami Beach Art Scene / James Morrow Satirizes Hollywood, Secret Goverment Projects And Godzilla In Shambling Towards Hiroshima / Godzilla 3D Poster / Will Silent Night Be Replaced By Godzilla Christmas?
By Ken Hulsey - May 07, 2009