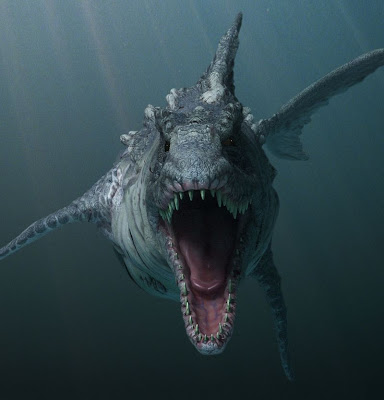 Isn't it wonderful that giant mutant monsters are popular again. After J.J. Abrams unleashed his giant monster movie, "Cloverfield", in theaters two years ago, there has been a non-stop parade of independent features where the motto, "bigger is better", has really been taken seriously.

Last year, The Asylum, made a huge media splash with their film "Mega Shark vs Giant Octopus". The film featured former 80s pop sensation, Debbie Gibson, playing second fiddle to a titanic shark and an equally gigantic octopus. Likewise, films of the same vein like, "Dinocroc vs. Supergator", "Megaconda," and even The Asylum's follow-up to "Mega Shark", called "Megapiranha", were all rushed into production by the end of 2009.

Now it seems that the king of B movie monsters, Roger Corman, was feeling a little left-out by all of this, so he has developed his own giant monster film for the SyFy Channel called, "Dinoshark."

Originally SyFy was playing around with two other monster film ideas, which they wanted Corman to help develop, "Dinocroc 2" and "Sharktopus!". In the end they passed on "Dinocroc 2", but went ahead with "Sharktopus!", which presented Corman with the challenge of figuring out how to combine a shark with an octopus.

"'Sharktopus!' is more difficult because you can imagine a prehistorical crocodile like the Dinocroc, but there's no such thing as prehistoric half-shark, half-octopus," Corman said. "I tried to figure out how to do this."

"It's fairly difficult to believe, but we only ask the audience to accept this one thing," he said. "After that, we take great care that everything else is logical from then on and is something that could happen."

For "Dinoshark", Corman turned to a more traditional approach for a giant monster movie, something more reminiscent to the classic creature features of the 50s and 60s, something with a "Godzilla" feel to it.

"Global warming causes the glaciers to break apart," Corman explains. "We start the picture with real beautiful shots of the glaciers falling into the ocean. The unborn egg of the Dinoshark that has been frozen for millions of years is released."

Actually, if you take a close look at the image of the Dinoshark (above), you can see a hint of the "King of the Monsters" there, but mostly it just looks like a monster shark with a T-Rex head attached.

Look for "Dinoshark" to premiere on SyFy, March 13th.

Dinosharks, Mega Sharks, Sharktopus, Dinocrocs? Good grief! This thing is really getting out of hand.

I'm going to develop my own creature, Dinotopuscrocshark! It's going to be one bad-ass monster.....that's very complicated......and has an identity crisis.