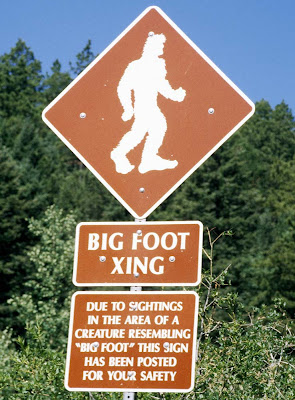 With the media hype surrounding the obviously fake Bigfoot video that has emerged from North Carolina it isn't too surprising that an eyewitness report of a strange creature crossing the highway in Pennsylvania would slip under the radar.

Paranormal investigator and author Stan Gordon has come forward with the account of an unsuspecting motorist who witnessed a large creature crossing a rural road in Butler County, Pennsylvania, on March 18, 2011.

The witness, at first, believed that the animal in question was a deer until he got closer to it and the animal stood up from being hunched over and walked across the road on two legs. According to said witness the creature was at least eight-feet-tall, covered in leathery skin, and walked in a very non-human manor.

Over the decades some pretty crazy Bigfoot stories have come out of Pennsylvania, most of which involve the creatures emerging from UFOs or exhibiting magical powers. This case however seems to be of a different kind of creature all together and may deserve a proper investigation, which Stan Gorden has provided via an interview with the eyewitness.

On March 21, 2011, I was contacted by a witness who reported having an encounter with a very strange creature during the early morning hours of March 18, 2011. The incident occurred on a rural road in Butler County between Chicora and East Brady. The witness, a businessman passing through the area, stated that “this was the freakiest thing I ever saw, and it made the hair stand up on the back of my neck.”

The man told me that he was driving down the road when from about a qurter-mile away, he observed something on the right side in a grassy area. His first thought was that it was a deer. The driver stepped on the gas to move closer to get a better view. From about 50 yards away, he observed something that appeared to be hunched down, and then stood up. The driver then observed a very tall muscular creature.

At this point, the driver had his high beams on and watched as the creature walked in front of a yellow reflective road sign, then crossed the two lane road in three long steps and continued into a wooded area. What he saw was a humanoid figure that stood at least 8 feet tall that appeared to have smooth leather-like skin that was of either a darker tan or light brown color.

The creature never looked at the witness, and was only observed from its side. The head appeared to be flat in the front section, and then rounded out. “At the top back of skull, it was like one of those aerodynamic helmets. The top was not quite a point, but looked like a ridge on top of the head.” The face was flat, and the eyes were not clearly defined, but the man thought that they might have been pointed in the corner. The ear that was observed on the left side was long and flat, and came up and back and was pointed backwards like a flap.

The arms were muscular and a little longer than that of a human. The hands looked more like a claw, but the number of fingers was unclear. One physical trait that stood out was the extremely muscular legs. The witness stated that it was hard to explain, but the legs did not move like that of a human, and “looked like they bent backwards.” The witness also saw what appeared to be wings on its back which were tucked into its body, with the wing tips extending toward the side of its head.

No unusual sounds or smells were noticed during the observation which was estimated to have been about 7-8 seconds. As the motorist approached the location where the creature entered the woods, it could no longer be seen. The next day the witness decided to drive back to the location of the encounter to look for any evidence. The ground conditions were not suitable for tracks, and nothing was found. The witness did, however, measure the road sign that the creature had walked in front of. The sign was just over 8 feet high, and the head of the creature was estimated to have reached about 4 inches above the sign.

Now back to that "Knobby" video from North Carolina. If there has ever been an ultimate 'fake' Bigfoot video then this one would surely rank as numero uno. The contents of the video are as follows .... guy in ape suit from Target shuffles ..... not strides .... or even walks ... across road. Twenty-four seconds of your life wasted.

The fact that this video has even made the news wires is even more amazing. With all the decent Bigfoot video evidence out there today the main-stream media has, as usual, fixated itself on yet another fraud.

No wonder no one ever takes these reports seriously!

Here is the vid if you want to see how not to fake a Bigfoot video: