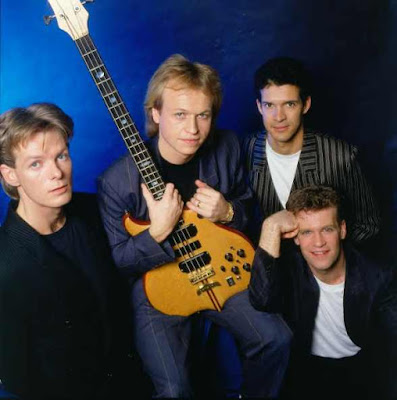 This internationally popular British pop/funk quartet, fronted by Mark King and Mike Lindup, is best known for the hits “Lessons in Love”, “Something About You”, “The Sun Goes Down (Living It Up)”, “Love Games”, and “Hot Water”. The genre-blending group started out on the Isle of Wight. Though their membership has fluctuated throughout the years, the original and perhaps best-known lineup of Level 42 consisted of Mark King aka “Thunderthumbs” (vocals & bass), Mike Lindup (vocals & keyboards), and brothers Boon Gould (guitar) and Phil Gould (drums).

Their first album, ‘Level 42’, came out in July 1981. Their first single, “Love Games”, became a hit, reaching #38 on the U.K. single charts, and has since been a fan-favorite. While the band didn’t quite break into the mainstream completely, this album and its follow-ups featured a spirited new wave sound that drew influence from jazz, funk, and rock.

After the success of the 1987 ‘Running in the Family’ album, the Gould brothers left the band, citing musical differences and nervous exhaustion. Said release, the seventh album from Level 42, included perhaps the group’s most popular and iconic single: “Lessons in Love”. ‘Running in the Family’ and their previous album, 1985’s ‘World Machine’, both brought them international stardom and critical acclaim, with ‘World Machine’ peaking at #3 on the U.K. album charts and staying on that chart for 72 weeks.

King and Lindup continued on after the brother’s departure, picking up replacement artists in Gary Husband on drums and former Go West and Kate Bush guitarist Alan Murphy. Murphy sadly passed away after suffering from an AIDS related illness in October 1989. The band released their then swansong album, ‘Forever Now’, in 1994.

At the end of the 80s, Mark King was recognized as one of the best bass players in the world, having partly pioneered the ‘slap and pull’ technique (treating the bass as a percussion instrument). His style and virtuosity still are hugely influential, considering he also sang while he played very difficult basslines. As time went on, the group’s singles continued to recieve major airplay, particularly the two international mega-hits “Lessons in Love” and “Something About You” - Source 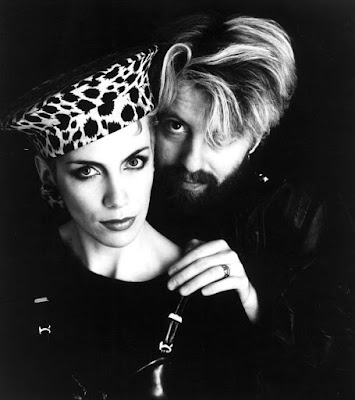 1984 (For the Love of Big Brother) is a soundtrack album by Eurythmics, their fourth studio album overall, containing music recorded by the duo for director Michael Radford's 1984 film Nineteen Eighty-Four, based on George Orwell's dystopian novel of the same name. Virgin Films produced the film for release in its namesake year, and commissioned Eurythmics to write a soundtrack.

Lennox and Stewart worked as a duo for these recordings, with no contribution from other musicians. The music, while containing many electronic elements, was far from being "synth pop"; Stewart described some tracks as being like "Kraftwerk meets African tribal meets Booker T and the MGs."

Most of the tracks are instrumental, with song titles and lyrics of two songs on the album being derived from Orwell's text. For instance, "I Did It Just The Same" is taken from a passage in the book where the protagonist, Winston Smith, relates how he committed "sexcrime" with a prostitute—initially deceived by her makeup, when he got close to her, he realised she was "about fifty – but I did it just the same". "Julia" was the name of Winston's lover. "Sexcrime" and "Doubleplusgood" are examples of Newspeak, the revised version of the English language spoken in Orwell's story. The track "Doubleplusgood" features a female announcer—the voice of the omnipresent Telescreen in the movie—reading out various memos which Winston had received at his job in the Ministry of Truth, where his role was to amend past and present newspaper articles so that they conformed to current Party dogma. The "Ministry of Love" was the government police and torture department, and included "Room 101", a room which contained "the worst thing in the world"—i.e. where each torture victim would be confronted with their own worst nightmare. - Source 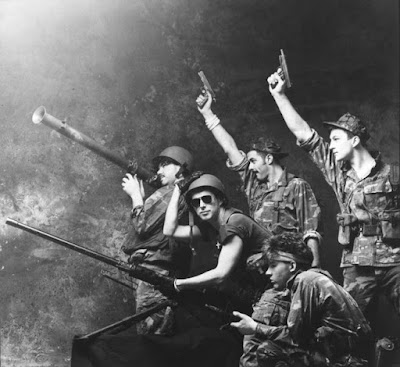 The group's 1983 debut single "Relax" was banned by the BBC in 1984 while at number six in the charts and subsequently topped the UK singles chart for five consecutive weeks, going on to enjoy prolonged chart success throughout that year and ultimately becoming the seventh best-selling UK single of all time. It also won the 1985 Brit Award for Best British Single. After the follow-up success of "Two Tribes" and "The Power of Love," the group became only the second act in the history of the UK charts to reach number one with their first three singles; the first being fellow Liverpudlians Gerry &; the Pacemakers. This record remained unbeaten until the Spice Girls achieved a six-single streak in 1996-1997. In 1985, Frankie Goes to Hollywood won the Brit Award for Best British Newcomer, and the band also received Grammy Award and MTV Video Music Award nominations for Best New Artist.

Liverpool was their second and last studio album, released in October 1986 (see 1986 in music). It would be the band's final album of all-new material, and lead singer Holly Johnson would leave the band following the corresponding world tour, followed by a flurry of lawsuits from ZTT. The album's production was handled by Trevor Horn's engineer Stephen Lipson, who urged the band to play their own instruments on this album (Horn having replaced the band's performances and arrangements with his session musicians or his own performances on Welcome to the Pleasuredome.) Liverpool therefore features a heavier rock sound than its predecessor.

The album was a commercial disappointment compared to the band's previous effort, though it charted generally high at #5 in the United Kingdom, #7 on the Austrian and Swiss music charts and #8 in Norway. The cover photo was different depending on what format was purchased (LP, cassette, or compact disc). - Source