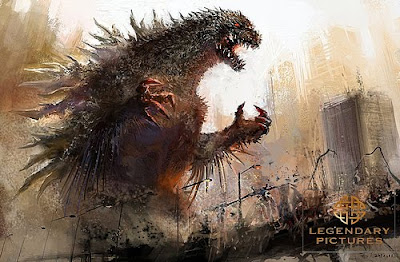 By now your probably aware that Legendary Pictures has hired the British film maker Gareth Edwards to helm their upcoming 3D "Godzilla" film. As the news broke on Tuesday I was caught off guard by the hire.

As I’m sure many of you out probably felt, the news was sort of a disappointment. Not to knock Edwards too much, but I had hoped for a more prominent director to take on "the king of monsters". Though, I had high hopes, things transpired much as I knew deep down in my heart as the would, Legendary Pictures would opt to go with somebody ‘trendy’ instead of somebody with a long pedigree.

Again, I really don’t want to take this time to bash on Edwards, for all we know he may indeed be the right man for the job and after all is said and done all of us "G" fans may be singing his praises for producing an excellent monster film. Only time will tell on that one.
In preparing this little piece I took some time to do some research on Edwards to gather some background info to try and put together a kind of feeling for what he may have in store for "Godzilla 2012." As many of you already know Edwards has only one major film title to his credit, "Monsters" which was released in 2010 besides that he has only two other projects under his belt, two short films, "Factory Farmed" and "Attila the Hun", both produced in 2008.

Granted, that isn’t a very long resume for someone who is about to take on the world’s most popular monster and his legions of fans around the world.

Now in regards to "Monsters" I have to admit that I haven’t seen the film, though I will undoubtedly seek it out now that Edwards has signed on for "Godzilla". I did, however, do quite a bit of searching online to see just what other "arm-chair" movie critics thought of the film. To be honest, those reviews that I happened to find were all over the place. Some critics loved it, some didn't, and yet others were on the fence. Granted, I’m certain that if I looked up reviews on just about any film I would find the same type of results. Regardless of all that Legendary Pictures must have seem something in "Monsters" that they really liked to hand a film like "Godzilla" over to Edwards.

On the plus side:

Edwards is a film maker who understands both special effects and cinematography, due to the fact that he handled both for "Monsters", and undoubtedly "Godzilla" is going to be a film heavy in both of those elements.

On the negative side:

Like with any film like this one can only hope that Edwards has a good working knowledge of the "Godzilla" movie series. If a survey of the film makers DVD library includes several Godzilla, and other giant monster genre, films then we can all rest a little easier, if not, then this good be just another crappy film in a growing list that has been churned out by Hollywood over the past decade.

Again, only time will tell.

First order of business for Edwards, find a replacement writer for the script to replace the ousted David Callaham. Then again, maybe that is why Legendary brought him on board, to write the story for the film as well? That seems like a stretch, but besides handling the directing duties, cinematography and effects for "Monsters" Edwards also wrote the darn thing.

Understandably the burning question is whether Legendary Pictures "reached" with the hire of Edwards or not? Was the director one of their fall-back choices? If you recall way back in March of last year when the studio initially announced that they were going forward with "Godzilla" they had stated that news on a director was coming shortly. Monster movie fans around the globe waited, and waited, and waited some more, but that news took almost a year. It would be safe to assume that the studio was actively pursuing a selected director, or group of directors at that time that either opted out of the running or had other projects that they had committed to.

So here we are, Legendary Pictures has locked on to Gareth Edwards to launch a new American Godzilla franchise. With any luck the film maker will soon begin to look for a creative team to aid him in making a monster film that lives up to vision that the studio talked about last year. My advice? Find out what the fan base wants to see in a new "G" film". Remember, despite what Michael Bay may think, they are your bread and butter. I know the idea is to make a Godzilla film that will appeal to the masses, but just don’t forget the core fans. It’s a razor thin line, I know, but if Abrams can make it work for "Star Trek" it can be done. Just for Gods sake do your homework on this one!